WHICH ONE IS THE REAL ME? 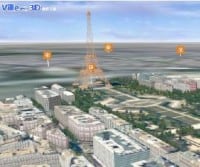 The Matrix Syndrome affects teens and adults as realities blur

A quarter of all urban teens are thought to be suffering from disassociated reality disorder, also known as ‘The Matrix Syndrome’. Many of them have become so immersed in their online worlds that they think WarcraftWorld or SeventhLife are their primary realities, and everyday existence is just a rather bizarre dream!

Others have so many online identities and character assumptions that they exhibit real-world multiple personality disorder, induced by this virtual schizophrenia. This lack of objective reality produces confusion, erratic behavior, and drug dependency, often the only way they can ‘ground’ themselves in the present.

New research has revealed that adults are also affected. Since the release of 3D phone books for all major cities, starting with Paris in 2006, and the integration of Google Earth with Amazon.com, more and more people are becoming confused – are they in a virtual environment, or a real one?

If you can pay for goods in Virtual Earth and have them delivered to your real-world apartment, why can’t you have another spouse too? And who’s to say your spouse isn’t a cleverly designed hologram, or just a Matrix artefact added to your so-called consciousness?

“Reality can be whatever you choose it to be”
So says author Vernor Vinge while demonstrating the latest augmented reality goggles. “It’s really just a high resolution heads up display that’s networked to the environment around you. So, in an auditorium like this, you can make the walls look like whatever you want, you can make the speaker look like a clown, and since everything is networked, you and your friends can get together and agree on what things look like. I call this consensual imaging.”
Vinge feels that virtually every aspect of purpose, faith and fantasy can have a constituency in this world of alternate realities. “That really raises a lot of possibilities for products, beyond games and entertainment. For instance, belief circles are something that fits very well; it could be buyers of Terry Pratchett novels, and basically that’s the world they want to live in, they’ve worked out consensual realities, like the Society for Creative Anachronism. Their whole world can be the Terry Pratchett sort of world.”
Which is all very well, but what about the psychology of alternate realities breeding new neuroses? What happens when people can no longer distinguish between an alternate reality and, well, reality. Or does that no longer really exist?
In the UK, a large group of professionals and academics points to the detrimental effects of this lifestyle on children and calls for an urgent public debate:
“In a fast-moving hyper-competitive culture, today’s children are expected to cope with an ever-earlier start to formal schoolwork and an overly academic curriculum. They are pushed by market forces to act and dress like mini-adults and exposed via electronic media to material which would have been considered unsuitable for children even in the very recent past.
Our society rightly takes great pains to protect children from physical harm, but seems to have lost sight of their emotional and social needs. However, it’s now clear that the mental health of an unacceptable number of children is being unnecessarily compromised, and that this is almost certainly a key factor in the rise of substance abuse, violence and self-harm among our young people.”
We may be inclined to pooh-pooh this view as the product of a ‘nanny society’, but if online games and virtual existence start interfering with one’s career and family life – as is increasingly the case – then surely they are as unhealthy addictions as alcohol or gambling?
In the movie ‘Vanilla Sky‘ Tom Cruise plays a publisher who chooses to enter a dream-like state and live out a fantasy reality. In this computer controlled environment he picks up subtle clues to the truth and eventually decides to face up to the real world – with disastrous consequences for his sanity. He is forced to choose between the two worlds, without being totally certain which one is real.
After all, isn’t reality just a point of view?

The counts are in and President Trump has an overwhelming vote of confidence in his continued leadership. With 95% of...
Read more

During the past two decades global energy demands have doubled. The nuclear power industry has grown on demands for electrical...
Read more
View more insights