THE HYDROGEN ECONOMY FIZZLES BEFORE IT STARTS 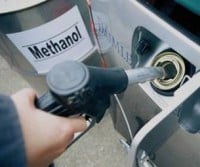 Methanol seen as the dominant fuel of the future

The hydrogen economy – with its vision of gas-guzzling engines replaced by hydrogen fuel cells that produce water instead of smog and greenhouse gases – may be over, before it even got started.

Perhaps it should not have surprised us; it was being predicted by George Olah, winner of the 1994 Nobel Prize in chemistry, ten years ago. At the time, Olah, whose research into the chemistry of hydrocarbons led to high-octane fuels and more easily degradable hydrocarbons, was director of the Loker Research Institute at the University of Southern California.

Olah argued that storing energy in the form of methanol, not hydrogen, could end our dependence on fossil fuels and transform carbon dioxide from a global-warming liability into an essential raw material. His vision has proved accurate.

Today, we have become used to topping up our fuel cells with methanol. Admittedly there are still more vehicles running on synthetic diesel made from methane-laden natural gas, but methanol is becoming the fuel of choice for fuel cells in electric devices, from golf carts to smartphones.

It seems that a pure ‘hydrogen economy’ may have been a bit of an air-headed idea after all.

The Methanol Economy
George Olah lays out the case for the methanol economy in his book ‘Beyond Oil and Gas: The Methanol Economy’.
“Man began to use coal on a massive scale during the Industrial Revolution, which was, what, 250 years ago. And we are already, to a very significant degree, depleting what nature gave us. Now, I’m not saying we’ll run out of it overnight, but we need to think about how we manage our problems now and how we will manage in the future.
You see natural gas getting in short supply, and we import liquefied natural gas. There are many natural gas sources – Nigeria, the United Arab Emirates, the North Sea, and so on. The energy content of a single LNG tanker is equivalent to a medium-sized hydrogen bomb. Bad guys are trying to blow up refineries now, and a big tanker is a very inviting target. I think a realistic solution is, again, to convert natural gas, as efficiently as we can, into a safe liquid product, like methanol.”
Essentially methanol is a store of energy and is a liquid combination of methane and oxygen. While methanol burns as readily in combustion engines as ethanol, it is the ability of methanol to power fuel cells directly, with a convenient, transportable liquid fuel, that holds the greatest promise for widespread use. Hydrogen, on the other hand, is the purest form of energy, and when burned or used in fuel cells produces nothing more noxious than water vapour. But hydrogen is extremely difficult to produce, contain and use safely. Costs of infrastructure to make hydrogen mainstream are prohibitive, whereas methanol can be handled almost as easily as gasoline.
Read the full interview with George Olah in MIT Technology Review for a better appreciation of this perspective.
Hydrogen as a fuel is the most environmentally friendly approach of all. However, most economies are based primarily on energy, and hydrogen does not naturally occur as a resource – it has to be produced. From this perspective, hydrogen is a store or carrier of energy, and not a source. The question then arises of how to produce hydrogen – efficiently – and deliver nett energy. Hydrogen can be extracted from seawater by electrolysis, but this requires electrical energy. Using a hydrogen-powered fuel cell to produce this green electricity would probably consume most of the hydrogen produced! Then there is the energy cost of storing, packaging, transporting and consuming the hydrogen. Being an extremely small molecule, hydrogen leaks very easily, is difficult to contain and pressurize. Hydrogen is also highly explosive and unstable.
Solar power could be used to extract hydrogen from seawater, but solar panels (at least with current technology) are expensive and require a lot of energy to produce. The number of solar panels required to produce a steady supply of hydrogen to fuel an economy would be uneconomical in financial and energy terms.
This does not imply that switching to an environmentally benign fuel source – in the long run – is not a good idea. It’s simply that there are better, more efficient, carriers of the energy. Synthetic diesel fuel is one, while methanol is a simple molecule which can be conveniently and economically handled, while still being environmentally superior to gasoline. A huge advantage of methanol is that it can be used directly in fuel cells, producing usable electricity from a convenient liquid fuel. In fact, portable fuel cells have already been produced by Toshiba for powering laptops and cell phones, using methanol.
Using diesel and methanol made from natural gas would allow us to transition to a more benign regime and make new technologies like fuel cells and hybrid vehicles mainstream.
This is echoed by a group of eminent engineers in an authoritative report on the subject:
“It seems that the recent surge of interest in a ‘hydrogen economy’ is reflecting visions rather than reality. We are not at all against hydrogen, but we would like the discussion about the synthetic energy carrier to return to facts and physics. Compared to thermal power plants, internal combustion engines and gas turbines fuel cells will be more efficient, cleaner and less expensive. These arguments speak for fuel cells operated on commercial hydrocarbon fuels like natural gas, gasoline, diesel, methanol, ethanol etc. Hydrogen is not required for the operation of fuel cells. [Our] assessment reveals that hydrogen may never play a dominant role in stationary or mobile applications. Most likely, natural hydrocarbons (methanol, ethanol, bio-diesel) or synthetic fuels (gasoline-like fluids from organic waste) will become the ‘long distance fuel’ of the future while local driving is powered by electricity. The vision of a ‘hydrogen fuel cell economy’ will remain a dream forever.”
Jeremy Rifkin’s vision from 2002, while laudable, seems flawed:
“Portable hydrogen fuel cell cartridges will be on the market by 2005 or 2006. You will be able to power up your cell phone and laptop computer for 40 days with one cartridge. The major automakers have spent more than two billion dollars developing hydrogen cars, buses and trucks. And the first mass-produced vehicles are expected to be on the road in just a few years.” Methanol fuel cells and hybrid vehicles, yes; but cars and computers that run on pure hydrogen? Probably not.

Now that scientists have perfected the technique of synthesizing DNA, it is possible to take computer-generated characters from virtual world...
Read more

New Year is for the birds

After the last three years of pandemic-depressed New Year’s celebrations, we’ve got something to shout about at last. Coronavirus is...
Read more