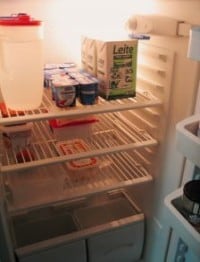 Morgan Spurlok, whose controversial 2004 blockbuster ‘Supersize Me’ attacked McDonald’s and fast food, is in hospital fighting for his life.

The 47-year-old documentary maker was busy on his new movie ‘Superstarve Me’ when he collapsed at a speaking engagement. Doctors at Carnegie-Mellon Hospital have diagnosed him with severe malnourishment.

Spurlok shot to world attention by filming his experiences eating nothing but McDonald’s meals for 30 days. This month he attempted something similar. He would eat nothing but convenience meals from Boston Market – also owned by McDonald’s.

Spurlok started to get concerned when interviewed last week. “I haven’t gained any weight. In fact, I’ve lost about nine pounds.”

While ready-meals are small and low in calories, they often lack sufficient nutrients to support a healthy lifestyle. Spurlok’s film was inspired by a UK consumer report. With 60% of under 30s now eating virtually all of their meals pre-packaged from supermarkets, a horrifying 15% of them are malnourished.

“Consumers have become so misinformed about health issues and too blinded by price, packaging and marketing,” said an exasperated health official. “Spurlok’s act was idiotic and misguided, but he has highlighted a terrible problem.”

In 1954 Gerry Thomas of Swansons, a US food company, invented the TV Dinner while tasked with finding a use for left-over turkey from Christmas sales. The new product caught a country in the midst of massive social change. Returning GI’s from World War II had moved their families to the suburbs and bought that age’s brand new top consumer good: the television. The age of the nuclear family had begun with mom, dad and 2.5 kids. The baby-boomers were spoiled for choice and the idea of eating different dinners – rapidly heated in an oven – while everyone watched television, was a winner.

In their first year Swansons sold more than 10 million units.

Right from the beginning nutritionists complained that these ready meals were unhealthy – high in starch, trans-fats, preservatives and salt. That didn’t stop consumers from leaping at the convenience presented by HMR (home meal replacement) options. In 2004 US consumers munched their way through US$ 20.4 billion of ready meals while British consumers managed GBP 1.9 billion. Demand grew by more than 180% over the decade from 1996 to 2006. Nearly of a third of consumers in rich nations eat a ready meal more than once a week.

Over the same period dietary related illnesses and obesity shot up to the point where half of Americans and a third of Britons are considered unhealthily overweight.

2002: Supersize Me
In July of 2002, Caesar Barber, a tubby middle-aged maintenance worker files a lawsuit against McDonald’s, Wendy’s, Kentucky Fried Chicken and Burger King. Mr Barber claims that eating food from these chains has caused his heart disease and diabetes.

None of these chains have ever claimed that their food is healthy or balanced. “The very term ‘junk food’ should have been more than enough warning to anyone choosing to eat nothing but these types of meals,” said the presiding judge in the case as he threw the suit out.

The fast-food industry is nervous enough to consider reacting to the threat from their customers – particularly when McDonald’s goes on to have their first quarterly loss ever. Within a year McDonalds has become the world’s biggest retailer of salads.

2004: Bowling Alone
“People in the UK work the longest hours, we are very time poor, and we don’t have a strong cultural history of cooking,” says Dr Susan Jebb, head of nutrition at the Medical Research Council.

At the same time reports from, among others – the World Health Organization – declare that obesity is a global epidemic. Consumers demand healthy food and the subdued lighting and beautiful packaging of ready meals are there in the supermarkets.

The ready-made meal boom also reflects changing social trends in Britain. More people live alone and so are less likely to be bothered to cook. And with families eating apart more often, ready-meals allow people to eat what they want when they want.

Traditional fast-food takes a knock when Morgan Spurlok releases his documentary “Supersize Me” which takes on McDonald’s. His film is incredibly influential despite the inherent flaws in his logic and the contradictions in the evidence. Consumers panic and flee to their nearest supermarket.

“Our customers are becoming so much more demanding. There’s pressure on time – people go out for a drink, go to the gym. People are on one diet one day, another the next, families eat at different times. And the complexity of life is so much greater,” says Julia Michna, head of “meal solutions” at Marks and Spencer.

Convenience is taking over supermarkets’ fresh produce departments. Bagged salad hardly existed five years ago. Now Tesco sells US$ 205 million worth a year. The basic lettuce has gone: these days it is washed and mixed with herbs, croutons and brightly-colored leaves to jolly it up. “Lettuce,” says Stan Burns, Tesco’s category manager for vegetables and salad, “was a slow-growing business. We’ve brought some excitement to it.”

Yet retailers are under pressure. 78% of consumers cited consistency, and 56% price, as their main criterion for choosing a ready meal in a Foodservice Product Development survey.

A single serving portion of food, ready to go, is an expensive thing to produce. The actual food cost of any sales item may be as little as 25% of the overall selling price. The rest goes on packaging and distribution… and profits. Margins are usually 40 – 50%.

With so much pressure on manufacturers the meals start being bulked out with starch, the spices removed and lots of salt added.

2007: Fast-moving Gourmet
For the first time in a decade, existing retailers are under threat. New chains, such as Fast Good in Spain, start to branch out serving a range of gourmet ready meals. The Boston Market in the US opens their 1,700th store, while McDonald’s and Burger King launch new, up-market stores with fashionable menus.

Big food retailers, such as Target in the US, Tesco in the UK and Carrefour in Europe are left with a choice – launch their own up-market brands, or push low-priced, high volume ready meals. Consumers don’t accept Target’s US$ 25 million attempt at launching a gourmet, high value range. The other retailers take note, and lower prices. Turnover jumps 20% in the first six months of 2007.

2009: Fast-moving Starvation
Entering a supermarket or major food store in 2009 is a vastly different experience.

Food has ceased to be tactile. Food is sealed inside an opaque plastic box and wrapped inside a cardboard carton. The photograph on the outside is of subtly lit and beautifully fashioned food dripping with health and value.

The photographs on the packaging are terribly misleading. The food is a disappointment – nothing more than processed rice, salt, artificial flavors, and a small nugget of processed meat. Well crafted packaging creates the illusion of plenty.

Consumers themselves, though, have become so used to the gap between presentation and reality that they hardly notice. Slow Food founder Carlo Petrini makes an impassioned plea at the International Food Conference in Portugal: “Glossy magazines are pornography rather than gastronomy. We must learn to enjoy food again, rather than just looking at the photographs.”

In late 2009, a report by the UK Consumer Health Board leads off under the heading: “Sainsbury’s will kill you!” They claim that eating only ready meals produced by Sainsbury’s (among others) will result in chronic malnourishment and diseases – such as scurvy and rickets – last seen in the UK a hundred years ago. A weight of statistics shows how Britons are not only overweight, but have been put on highly expensive nutrient supplements by the National Health Service to counter inadequacies in their diets. The cost to the British tax-payer is estimated at GBP 5.3 billion per year. The government is outraged. The US and many European governments announce similar investigations.

Sainsbury’s sues for defamation. They lose. The major retailers brace themselves for lawsuits.

In the midst of this Morgan Spurlok begins his documentary. He figures that the UK must be the tip of the iceberg. After all, the US is the home of convenience meals. The largest ready-meal retailer in the US is Boston Market. Morgan is delighted. McDonald’s owns Boston Market. After three weeks he collapses at a speaking engagement. He is rushed to hospital at the Carnegie-Melon Centre. Doctors there diagnose severe malnourishment. “His actions are not just misguided, but extremely foolish. He is on a nutrient drip now, but it will be some days before he is healthy enough to leave,” says chief nutritionist, Dr Oscar Winslow.

Scientists have discovered the secret to happiness, and it’s all in the genes. Buried in the sequence of ‘junk’ DNA...
Read more

The financial meltdown of 2008 affected not only the bonuses of the Wall Street bankers, their Porsche dealers and their...
Read more

If you’re like me, you love tech and you love cars. But you don’t like buying the latest model, with...
Read more
View more insights