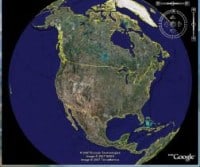 Google Earth’s virtual online buildings, designed and built by the in-world residents, now cover most of the developed world and all major tourism destinations. The annual value of e-commerce and online financial services makes it the planet’s sixth biggest economy.

Google’s 3D view of the world, using satellite imagery, was too big to turn into a detailed representation of every building and feature of the planet – but not for the millions of internet users around the world who provide local information in intimate detail.

Business owners populate their virtual offices and stores right there in Google Earth where their real store is located, and customers ‘teleport’ in from Second Life, or just from their living rooms.

This explosive growth in virtual commerce has even been investigated by the FBI, but has grown globally to eclipse California in economic value.

Whether it’s real estate, development aid, disaster relief, international business deals, or just plain shopping – you can find it all on Google Earth.

Building a virtual economic skin
It’s a simple but quite brilliant concept.
When Google launched Earth, their 3D view of the world, using satellite imagery, they wanted to capitalize on local features and attractions to boost their advertising channels. But they soon realized it was too big a task for one company, so they turned it over to the users. With free software tools and lots of encouragement, Google soon had millions of internet users around the world providing local information in intimate detail – and even rendering it as a layer on their Google Earth environment.
Google Earth already has many large city features like the Empire State Building in full 3D. Now, using SketchUp, advanced users can add real or imagined buildings and artefacts to the terrain of Google Earth. You can also provide pictures and local mapping information to enhance the detail at a local level. It’s like a Wikipedia for Earth.
The really interesting bit comes with creative use of the platform. Say you want to develop some coastal land. Simply sketch it up and position your development right there in the landscape. Prospective customers and planning authorities will be able to take a virtual tour of your resort, on-site and mapped to the terrain, before the plans are even approved.
How about a virtual Da Vinci Code tour? You could visit the actual sites and buildings, tour the journey and look at the paintings and memorials just as they really are. What about chatting to other tourists, or their avatars at least? It’s a small jump to buying souvenirs at the virtual gift stores on your way, or booking the actual tour at the virtual travel agent.
Once Google Earth allows an immersive environment, complete with avatars, the potential for local-based virtual commerce becomes explosive. And with regular NASA updates, and even web-cams at strategic points, the virtual world of Google Earth could mimic the real world so closely, it might be difficult to tell which one you’re in!

I am the wind wrangler

With flaring nostrils I test the air, funneling every subtle hint and nuance to my core. Greedily I drink the...
Read more

An attempt to assassinate the US President was foiled today by White House security. “At no time was the President...
Read more

SUGAR AND FAT ARE THE NEW TOBACCO

In a surprisingly quick and controversial judgement the food industry has been served the most dangerous curved ball in its...
Read more
View more insights